In 1979 during my second year as an apprentice to Dorita Konyot, she explained that Walter Farley was coming to take a lesson. My heart sped up and my mouth went dry. Walter Farley! I was going to meet the celebrated author of “The Black Stallion” book series. Walter Farley ranked higher than John Lennon of The Beatles in my personal list of celebrities that I fantasized about meeting.

Picture on left: Walter Farley rode Robin during his lessons with Dorita Konyot. Robin was owned by Chuck Skelton and was used as a High School Exhibition horse by Chuck. Walter was a good rider and enjoyed his lessons.

My childhood copy of Walter Farley’s “The Black Stallion” was permanently dog-eared at my favorite passages so it was easier to find when I wanted to reread it (for the 50th time). The chocolate finger marks around the edges of the page stood testament to my penchant for eating and reading at the same time. The first time I read “The Black Stallion” I was frustrated because I knew that Alec obviously should have been Alexandra, a girl. I dealt with this oversight by ignoring the incorrect pronouns and decided that Alec was short for Alexandra. Denial and self-deception were two of my very best early coping skills. 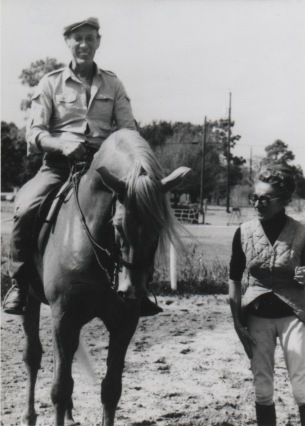 Picture on left is Walter Farley riding Robin with Dorita Konyot beside them.

Dorita told me that Walter had ridden with Captain Heyer, Arthur “Pop” Konyot (Dorita’s father) and herself for years. These names are familiar to early dressage admirers. The Ringling Brothers Circus brought these horse trainers/exhibitors to America and provided Americans with the earliest demonstrations of dressage riding in the form of entertainment acts in the Circus. These riders (and others) performed to music in bright costumes under saddle and in Liberty acts. Walter loved traveling the world a great deal. His summer home/farm was in Pennsylvania but Walter and his wife spent the winter at his home in Venice, Florida. Walter would spend the morning writing, as was his custom. He would then drive up to Dorita’s stable in Sarasota in the afternoon and take a lesson; afterwards Walter and Dorita would have cocktails and conversation. My job was to get Robin ready for the lesson. Robin was a gorgeous Palomino Andalusian stallion owned by Chuck Skelton. Chuck and Dorita had trained Robin in the High School Movements and Chuck exhibited his musical acts at circuses and horse exhibitions. After the lesson I would take care of Robin and then join Walter and Dorita for cocktails and conversation! I was over the moon happy!

I found Walter to be a gentleman with a lively wit and wonderful sense of humor. He was an enjoyable person to listen to and to talk with. I was naive about exhibitions, circuses and early dressage training in America. I listened with surprise and fascination about a world I had no clue existed. Central to these stories was the theme: a Good Horseman was never violent. Several people had told me about the poster on Captain Heyer’s office wall in his riding school. It read:

Picture on left is of Captain Heyer performing Levade on his famous mount Starless Night. The horse lived well into her 20’s as part of the Heyer family. There is a picture of Walter Farley and Captain Heyer on http://www.blackstallion.com

What an enlightened training philosophy! Dressage riding was an art. Calmness and patience were priorities in a correct training program. I was in my mid twenties when I was with Dorita and these virtues were in short supply in my young life. Many years have gone by since these conversations happened; I have kept those words in my heart. I want my riding to be art, not violence. Walter and Dorita traded stories where training the horse was done in clever ways that did not punish the horse. I understood that these earlier horse trainers were under pressure to produce an entertaining performance every day and in sometimes-miserable conditions. These performers had the ability to entertain masses of people by riding exciting movements to lively music while dressed in colorful costumes on horseback. This profession provided food and a home for them and their families. Surely it would have been easier to take the short cut to a desired training goal? Yet here were stories where the longer, more horseman-like road was the more admired choice. Walter Farley died in 1989. Dorita died in 1997. I want to pass down what they taught me in those conversations long ago. Dressage training is an art. Use skill, not violence, to train.

Welcome. After thirty years of immersion in the equine profession, during which time I trained horses and students across disciplines and breeds, I am embarking on a new expedition - blogging. My training philosophy focuses on improving the performance and partnership between the rider and the horse. The purpose of this blog is to share my experiences and to hear about yours. I look forward to taking this journey with you. My home is in Clermont, Florida on an 11-acre training facility with my husband Bill, our dachshund, Krieger, a couple of barn cats and the horses. My career brought me to Florida in 1990 as a working trainer and rider. I am currently serving as Vice President of Central Florida Dressage and am the editor of The Centerline, CFD’s eNewsletter. Below are a few of my credentials B.S. in Animal Industry from Penn State University U.S.D.F Rider Silver Medal U.S.D.F. Certified Instructor (T-2) U.S.D.F. Graduate (with distinction) Learner Judge Program U.S.E.F. Technical Delegate “R” F.E.I. Level One Steward The five years I spent as assistant trainer to Dorita Konyot established a life long philosophy and training style that I continue to practice and teach to others. View all posts by equestriannotebook

I am happy you stopped by my blog. I will be posting some thoughts, stories and pictures about the equestrian world that we find so fascinating. Leave a comment or suggest a topic for a future blog. Enjoy.